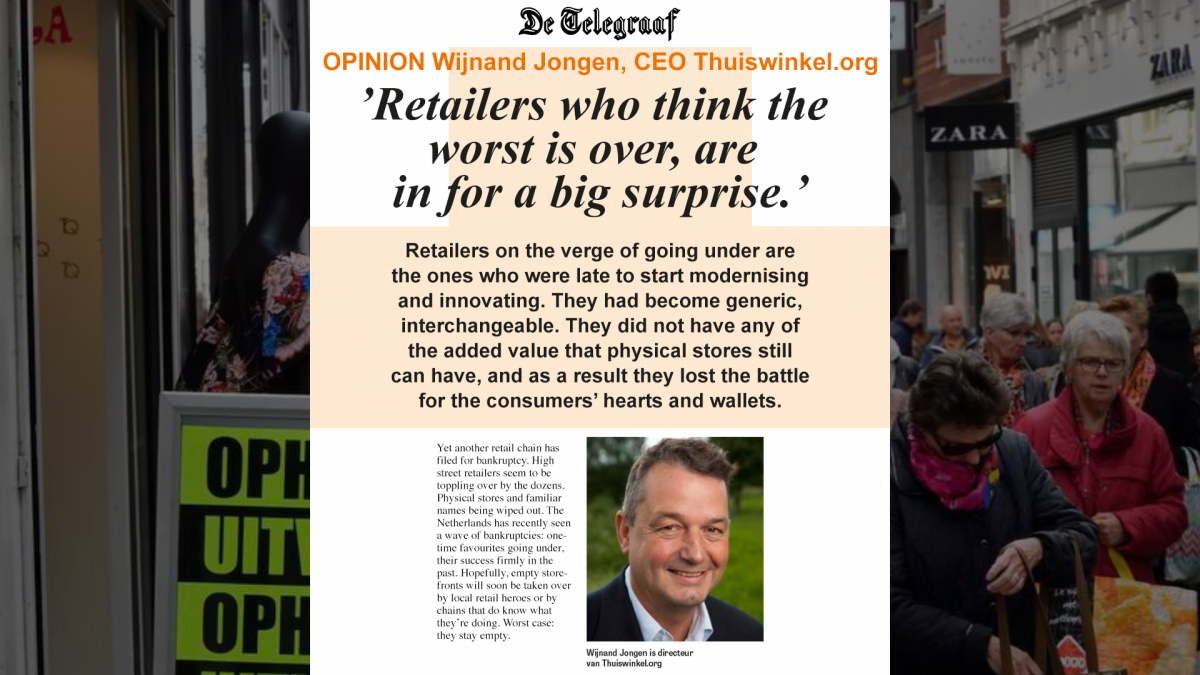 Yet another retail chain has filed for bankruptcy. High street retailers seem to be toppling over by the dozens. Physical stores and familiar names being wiped out. The Netherlands has recently seen a wave of bankruptcies: onetime favourites going under, their success firmly in the past. Hopefully, empty storefronts will soon be taken over by local retail heroes or by chains that do know what they’re doing. Worst case: they stay empty.

Bankruptcies affect consumers. They are food for discussion. Some consumers are glad to see the retailers go, others feel nostalgia and admit to missing the stores in question. Yet, those same merciless consumers are part of the reason why the stores are going bankrupt. When they opted for competing retailers, or didn’t visit the store often enough, or adopted new (online) retail behaviour, they contributed to stores ultimately closing down.

Today’s consumer could not be more demanding. He wants personal attention, excellent service, a feeling of being number one, to receive only relevant offers and it all has to happen exactly when it suits him. Are any of these demands crazy, though? Not really. This is how retail worked fifty years ago. The baker knew your name, he chatted with you, knew which bread you liked best and which day of the week you needed it. The unstoppable increase of retail chains, with homogenous high streets as the result, and the lack of well-trained staffers has made personal attention disappear. The bottom line started to count: turnover, volume, maximising profit margins – all of which pushed attractive shopping centres and what was best for the consumer out of the way. We need a return to the good old days, with all the opportunities that today has to offer as well.

Retailers on the verge of going under are the ones who were late to start modernising and innovating. They had become generic, interchangeable. They did not have any of the added value that physical stores still can have, and as a result they lost the battle for the consumers’ hearts and wallets. Retailers do not go bankrupt due to a hot summer, or because they are faced with costs spiralling out of control, or because webstores are stealing customers from them. Retailers go bankrupt because their business case has lost its merit and because consumer shopping behaviour shows no mercy.

Retailers, real estate developers and local governments who think the worst is over, are in for a big surprise. We are only just starting to see the (digital) developments that are bound to radically turn the retail world upside down, again. The transformation of the retail business has only just started. Retail globalisation, the increasing popularity of marketplaces and all the new technology that will change our shopping behaviour even more, on account of making life easier for us (voice, domotics, PSD2, e-identity and so on).

There are plenty of opportunities for every store – offline, online and onlife – that is bold enough to accommodate the wishes of consumers or, stronger yet, dares to be ahead of the pack. Retailing is an age-old business, but retailers today must realise, now more than ever, that it is the consumer who decides what he wants, how he wants it, not to mention when and where. It is the merciless consumer who matters.

This piece was written in Dutch Newspaper De Telegraaf.